GAME NIGHT: WHERE NO MAN HAS GONE BEFORE 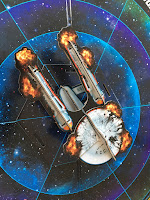 In celebrating Star Trek's 50th anniversary, we featured Star Trek Panic! from Fireside Games and USAopoly at our September Big Game Night.  Star Trek Panic! is based off of Fireside's popular Castle Panic! game.  The goal in STP! is to complete 5 missions while being bombarded by all sorts of enemies.  Each player takes on the role of a crew member and has a hand of cards that allows them to take actions to accomplish the goals and defend or repair the ship. While we didn't fare so well, all had a good time. 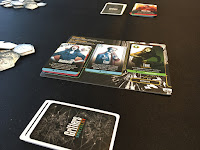 Also hitting the table was Grifters from Indie Boards and Cards.  This is a unique hand management, set collection game in which each player represents a rival gang that are competing to pull off the biggest jobs and gain the most money.  The twist on this game is that when you play a card or set of cards to your player board you get their action but they then advance across the board over a series of three 'nights' or turns before you can reclaim them to your hand.  This offers another level of strategy for managing your hand.  Each card represents a 'Specialist' that has a unique ability and they also come in three different colors or suits that you will match up to claim the 'job' cards.  The more job cards you collect of the same type, the more they're worth.  Easy to learn and fun to play.

Other games that saw some action were New York 1901, a gateway-level area control game,  Betrayal at House On the Hill and Mystic Vale.

The next Big Game Night isn't on the schedule yet, but we're hoping to get some smaller sessions in soon.  Until next time...
Posted by Unknown at 2:28 PM