Greetings!  After taking a loooong holiday break, we're back.  And, just because we haven't been posting, it doesn't mean we haven't been playing.  Most recently, we've managed to get some newly acquired games to the table. 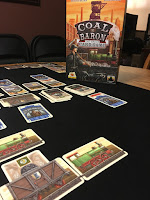 First up, Stronghold Games' release of Coal Baron: The Great Card Game. This is the little brother of the the Coal Baron board game and has some familiar elements to it as well as plenty of brand new mechanics, and did I mention a whole lot of cards! 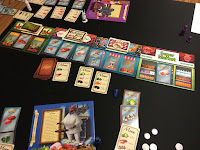 Next, the family got together for Menu Masters from Calliope Games.  This is part of their Titans Series games and is from designers Zach and Jordan Weisman.  Get the ingredients you need to fulfill menu orders and try to get the most points doing it. Yummy! 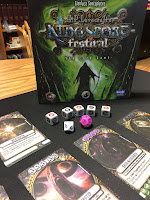 Finally, we entered the dark realm of H.P. Lovecraft with the new release from Passport Games Studios, Kingsport Festival: The Card Game.  Much like the board game, players are the cultists trying to summon the ancient ones but this time you're using your arcane resources to acquire cards to build a powerful deck to help you summon more monsters and defeat those pesky investigators.  It's for 3-5 players and takes about 30 minutes.
Posted by Unknown at 2:31 PM