Greetings!  It's that time of year again.  Time for all good tabletop game enthusiasts to head to North America's (and depending on who you ask, the world's) biggest convention for their beloved hobby.  From its humble beginnings fifty years ago to its massive sell-out crowds today, Gen Con has been the high point of the convention season.  Over 500 new board game titles have been announced to be available for sale or for demo at this year's convention so there should be something for everyone.  We'd like to take this opportunity to mention but a humble few that are on our short list that have us excited. 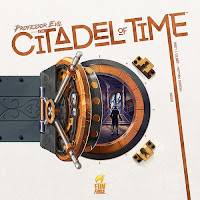 Number one is Professor Evil and the Citadel of Time from Passport Game Studios.  We had an opportunity to demo this at Origins and it was a blast.  A co-operative game, players infiltrate Professor Evil's citadel to re-acquire artifacts he has stolen throughout time before he locks them away forever.  You have to disable traps and avoid the Professor at every turn while trying to access various artifacts scattered about the lair. 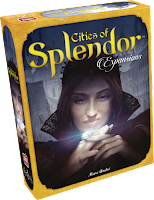 Next, Cities of Splendor from Space Cowboys, the highly anticipated expansions (4 in the box) for the critically acclaimed game.  The expansions include: The Cities, replaces the noble tiles with city tiles that have objectives; The Trading Posts, introduce bonuses for development cards; The Orient, adds three new decks to the originals at each level of development; and The Strongholds, which allows additional options for reserving cards. 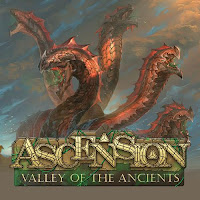 In Ascension: Valley of the Ancients, the new stand-alone expansion from Stone Blade Entertainment, players compete for control of three different temples.  As with most Ascension expansions, new mechanics and card play are introduced to add more variety to the game.  This has been one of our favorite deck-builders.

....And another deck-builder will be debuting at Gen Con this year.  Atlas Games will be launching Witches of the Revolution, a cooperative game where users pool their card resources to overcome challenges and eliminate the big bosses to make sure the forces of evil are kept at bay and the American Revolution succeeds!  We checked out a demo at Origins and it was a lot of fun.

So that's all for now.  Hopefully, we'll be able snag these and report back with some reviews later.  Until then, all you Gen Con 50 attendees, happy hunting!
Posted by Unknown at 4:38 PM